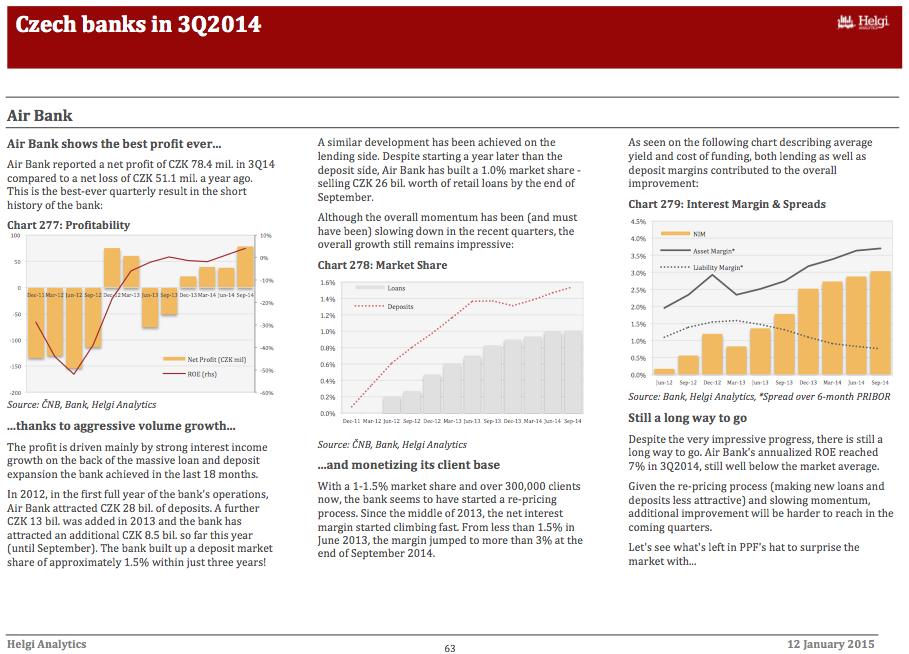 Air Bank reported a net profit of CZK 78.4 mil. in 3Q14 compared to a net loss of CZK 51.1 mil. a year ago. This is the best-ever quarterly result in the short history of the bank:

...thanks to aggressive volume growth...

The profit is driven mainly by strong interest income growth on the back of the massive loan and deposit expansion the bank achieved in the last 18 months.

In 2012, in the first full year of the bank's operations, Air Bank attracted CZK 28 bil. of deposits. A further CZK 13 bil. was added in 2013 and the bank has attracted an additional CZK 8.5 bil. so far this year (until September). The bank built up a deposit market share of approximately 1.5% within just three years!

A similar development has been achieved on the lending side. Despite starting a year later than the deposit side, Air Bank has built a 1.0% market share -  selling CZK 26 bil. worth of retail loans by the end of September.

Although the overall momentum has been (and must have been) slowing down in the recent quarters, the overall growth still remains impressive.

...and monetizing its client base

As seen on the following chart describing average yield and cost of funding, both lending as well as deposit margins contributed to the overall improvement.

Still a long way to go

Despite the very impressive progress, there is still a long way to go. Air Bank's annualized ROE reached 7% in 3Q2014, still well below the market average.

Given the re-pricing process (making new loans and deposits less attractive) and slowing momentum, additional improvement will be harder to reach in the coming quarters.

Let's see what's left in PPF's hat to surprise the market with...