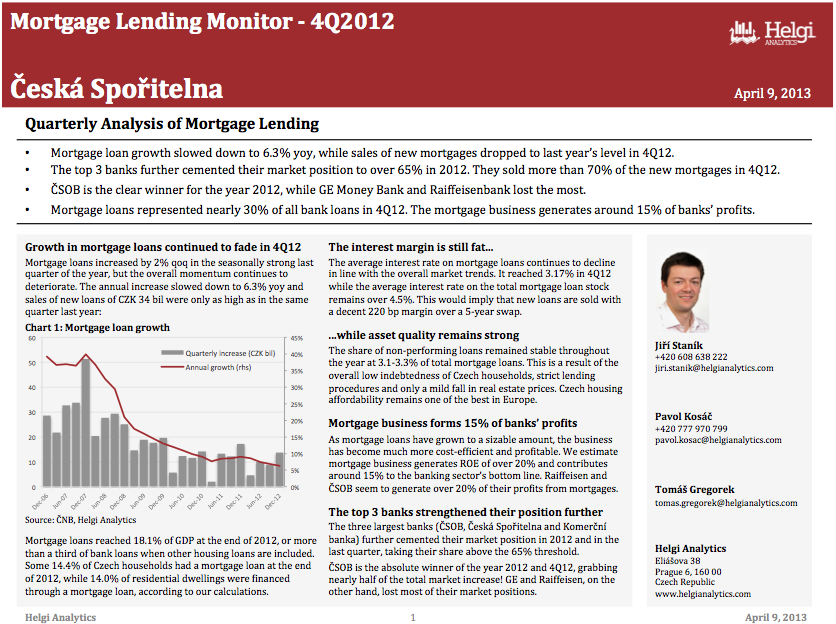 This report focuses specifically on development in Ceska Sporitelna in the 4Q2012. The key highlights are:

Česká Spořitelna’s mortgage loans increased 2.7% qoq in 4Q (and 9.1% yoy in 2012 overall), slightly more than the overall market. The loans provided by Spořitelna’s building society also showed some signs of revival, according to preliminary numbers.

Following the relatively weak years 2008-2010, Česká Spořitelna started gaining market share in 2011. In 2012, the bank grabbed nearly 28% of the annual increase in the mortgage loan book and was holding 19.87% of the market at the end of the year, according to our calculations.

The bank is clearly benefiting from its superior funding and capital position when compared to the smaller players. In terms of new production, Spořitelna was nearly as aggressive as ČSOB in 2012, selling 28.9% of all new loans (compared to the 30% of ČSOB).

In addition, 4Q seems to have been an especially strong quarter for the bank as it sold 30% of new mortgage loans, beating ČSOB for the second time in the year (after a strong 1Q12). In terms of new mortgage contracts, the bank sold 22% more loans yoy than in 4Q11 and 47% yoy more than the average for 2011.

Mortgage loans represented 29.6% of Spořitelna’s total loans at the end of 2012. That is up from the figure of 9% seen a decade ago and at a very similar level compared to Komerční Banka, for example.

The massive growth in volumes made a difference to the bottom line of the bank. When Hypoteční banka’s financials are taken as a benchmark (for more details see page 9), we believe the mortgage lending business generates around 12-13% of Česká Spořitelna’s overall profitability now.

Apart from the relatively stronger position of ČSOB in mortgage lending (with a 26% share of the market versus the 20% share of Spořitelna), Česká Spořitelna is benefiting from stronger profitability elsewhere (such as on its cheaper deposit base).