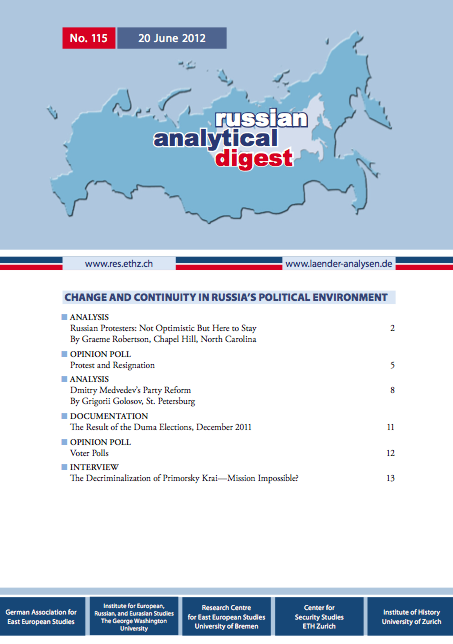 Language: English
Provider: RAD
Pages: 16
This edition considers the Russian political context in the wake of the recent Presidential and Duma elections, and a series of popular protests against the existing political regime. In the first article, Graeme Robertson examines the protest movement that has come to the fore over recent months. He suggests that the protesters did not expect their large-scale demonstrations around the elections would lead to immediate political change and are instead committed to a long-term campaign to realize change. In the second article, Grigorii Golosov analyzes the reforms of the regulations governing political party registration and participation in elections that were introduced following the December 2011 Duma elections. He argues that while these reforms are positive for the development of a democratic political system, the authorities have also designed the new law to strengthen their own hand in the political field. In addition, this edition reprints an interview with Vitaly Nomokonov about the removal of Sergei Dar'kin as Governor of Primorsky Krai during the Presidential election campaign, which has gained a lot of attention within Russia
Society | Russia | June 09, 2012
Download
Excel Sheet, 16 pages