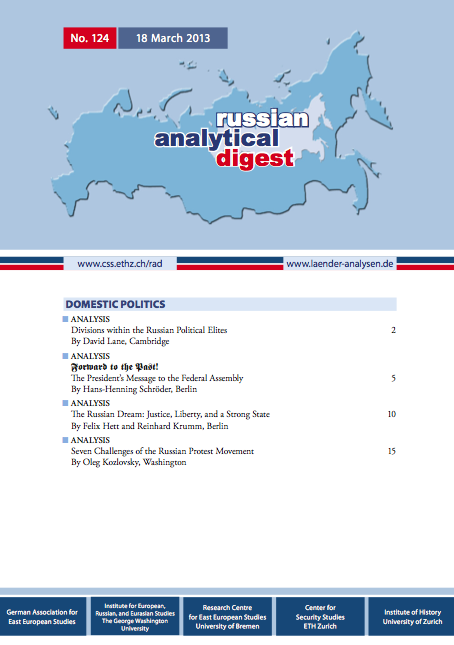 A year on from the 2012 Presidential elections, this edition considers Russia's domestic politics. David Lane provides an analysis of Russian elites, contending that the political leadership is a coalition of two constituencies: a politically led national statist bloc and liberal Western-oriented economic interests favouring neo-liberal market policies. Henning Schröder analyses Putin's 12 December 2012 address to the Federal Assembly, arguing that it was significant not for the policy agenda it outlined, but for its attempt to set in place a national-conservative narrative that evokes Russian traditions and past glories. Felix Hett and Reinhard Krumm assess the findings of a survey conducted by the Russian Academy of Sciences and the Friedrich Ebert Foundation into the "Russian Dream". They outline that it suggests that social justice is the highest priority for a majority of Russians, who consider that this can only be ensured by a strong state, but at the same time do not wish to see state intervention in their personal lives. Oleg Kozlovsky outlines seven challenges facing the Russian protest movement in 2013, including balancing moderates and radicals, reducing the influence of extremists and broadening its appeal outside of Moscow and St. Petersburg.
Society | Russia | March 26, 2013
Download
Excel Sheet, 0 pages