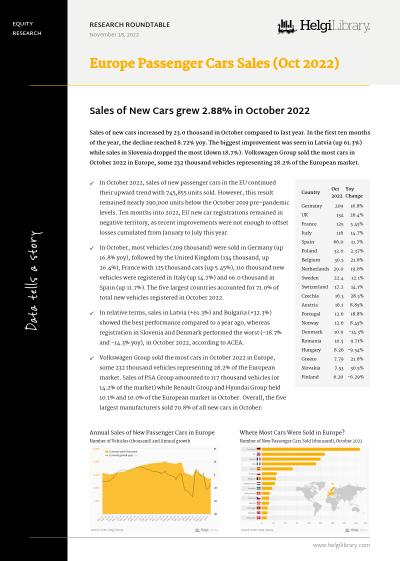 Sales of new cars increased by 23.0 thousand in October compared to last year. In the first ten months of the year, the decline reached 8.72% yoy . The smallest decline was seen in Latvia (61.3%) while sales in Slovenia dropped the most (-18.7%). Volkswagen Group sold the most cars in October 2022 in Europe, some 232 thousand vehicles representing 28.2% of the European market.

In October 2022, sales of new passenger cars in the EU continued their upward trend with 745,855 units sold. However, this result remained nearly 290,000 units below the October 2019 pre-pandemic levels. Ten months into 2022, EU new car registrations remained in negative territory, as recent improvements were not enough to offset losses cumulated from January to July this year.