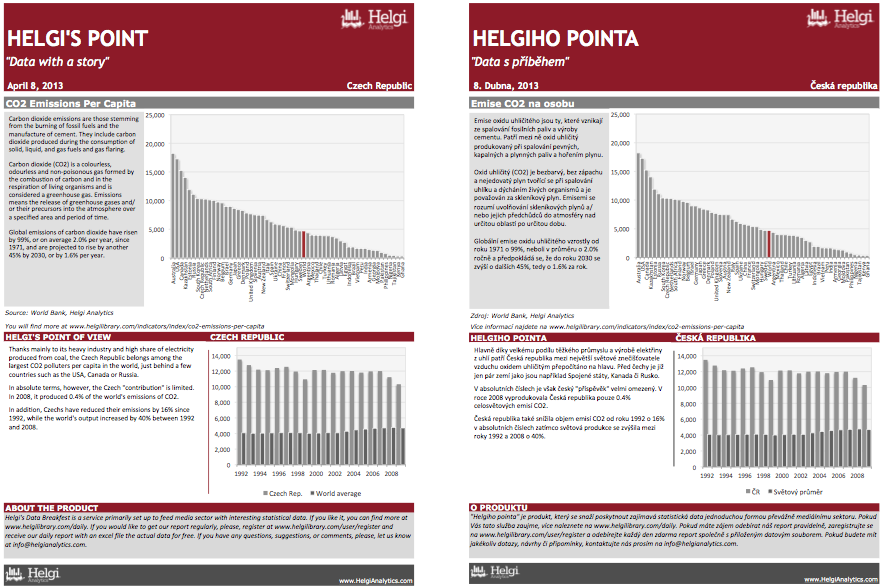 Language: Czech / English
Provider: 2013
Pages: 1
Carbon dioxide emissions are those stemming from the burning of fossil fuels and the manufacture of cement. They include carbon dioxide produced during the consumption of solid, liquid, and gas fuels and gas flaring. Global emissions of carbon dioxide have risen by 99%, or on average 2.0% per year, since 1971, and are projected to rise by another 45% by 2030, or by 1.6% per year. Thanks mainly to its heavy industry and high share of electricity produced from coal, the Czech Republic belongs among the largest CO2 polluters per capita in the world, just behind a few countries such as the USA, Canada or Russia. In absolute terms, however, the Czech "contribution" is limited. In 2008, it produced 0.4% of the world's emissions of CO2. In addition, Czechs have reduced their emissions by 16% since 1992, while the world's output increased by 40% between 1992 and 2008.
Energy & Utility | World | April 07, 2013
Download
Excel Sheet, 1 pages