Mitsubishi Motors Corp. at a Glance 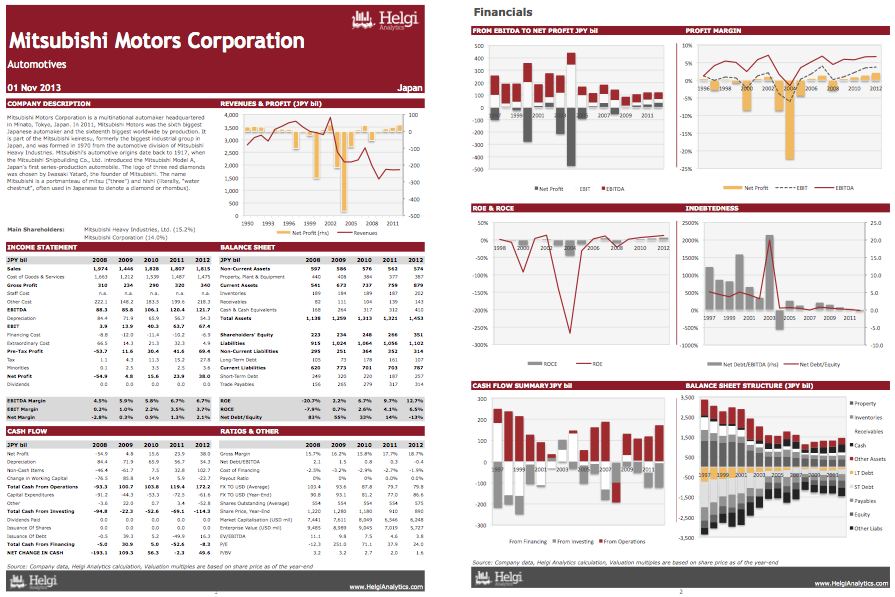 Mitsubishi Motors Corporation is a multinational automaker headquartered in Minato, Tokyo, Japan. In 2011, Mitsubishi Motors was the sixth biggest Japanese automaker and the sixteenth biggest worldwide by production. It is part of the Mitsubishi keiretsu, formerly the biggest industrial group in Japan, and was formed in 1970 from the automotive division of Mitsubishi Heavy Industries. Mitsubishi's automotive origins date back to 1917, when the Mitsubishi Shipbuilding Co., Ltd. introduced the Mitsubishi Model A, Japan's first series-production automobile. The logo of three red diamonds was chosen by Iwasaki Yatarō, the founder of Mitsubishi. The name Mitsubishi is a portmanteau of mitsu ("three") and hishi (literally, "water chestnut", often used in Japanese to denote a diamond or rhombus).

This report offers a summary of the company's performance in 1996-2012. You will find here all the key numbers from the company's balance sheet, income statement and cash flow on the annual basis.

In addition, the report provides information concerning Mitsubishi's position on its key markets.