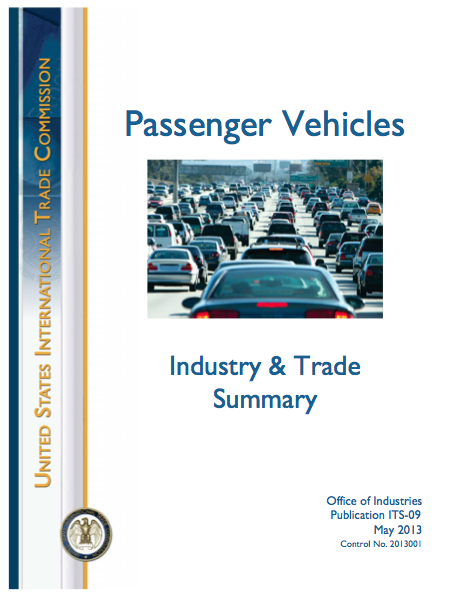 The United States is a major global producer of passenger vehicles, an industry that is undergoing dramatic changes. From 2007 to 2012 the U.S. industry faced a sharp decline in demand, largely stemming from the economic downturn in 2008 and 2009, but the industry rebounded as the economy recovered during 2010–12.

Concurrently, major changes in the global passenger vehicle industry and market also impacted the U.S. industry. Some production for the U.S. and Latin American markets shifted to Mexico from Canada, Europe, Japan, and the United States, while the Chinese passenger vehicle market grew rapidly to become the largest in the world.

Furthermore, passenger vehicle manufacturers are significantly changing the design of the vehicles they will be producing in the future to meet increasingly stringent fuel efficiency regulations.

The passenger vehicle industry is one of the most important manufacturing industries in the United States, and one of the largest of its kind in the world. It directly employed more than 160,000 workers and accounted for more than 4.2 percent of U.S. merchandise exports in 2012.

This industry produced more than 40 million passenger vehicles during 2007–12 including cars, vans, minivans, crossover utility vehicles (CUVs), sport-utility vehicles (SUVs), and pickup trucks for the U.S. market and for export.

This industry summary surveys the global passenger vehicle industry, market, and trade. The next two sections describe global industry characteristics and trends. The subsequent two sections assess the U.S. industry and market, and the fifth section examines U.S. imports and exports. The final two sections analyze the major foreign industries and markets. This report primarily covers the six-year period from 2007 to 2012.