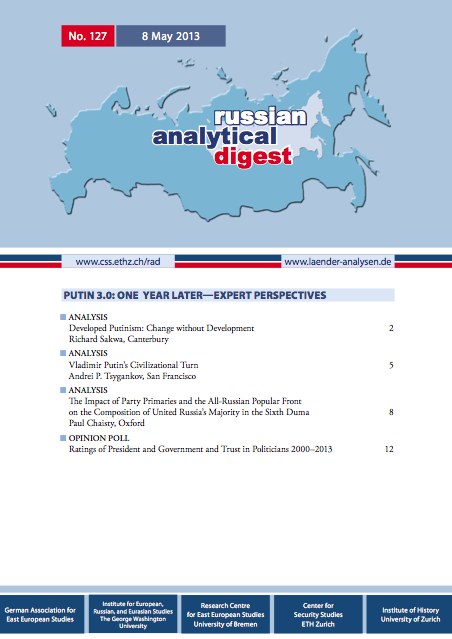 A year after Putin's return to the presidency, this edition provides expert perspectives on Putinism in its third term. In the first article, Richard Sakwa considers the evolution and adaptability of Putinism from its origins to its current incarnation. He argues that the limits on its evolutionary potential are now evident, and that it is proving unable to respond to the new challenges it faces in creative and progressive ways. In the second article, Andrei Tsygankov considers how Putin's new rhetoric of Russia as a distinct system of cultural values or civilization is shaping foreign policy. He suggests that Russia now seeks to position itself as a power capable of synthesizing Western and Islamic influences and assisting the world in managing global cultural diversity. In the third article, Paul Chaisty examines the effectiveness of the measures introduced by United Russia before the 2011 parliamentary elections to clean up the ruling party. He concludes that the Popular Front has not transformed the parliamentary majority in the ways that were originally outlined, largely because powerful regional and financial elites continue to crowd out other social forces; a situation that will be difficult to change.