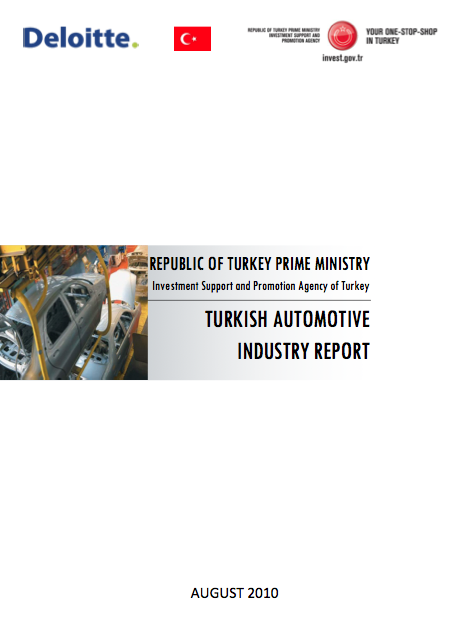 Turkey’s automotive sector’s foundations date back to the 1950s when the first production under license from Ford, Renault and Fiat, in a heavily protected domestic market, began. Over recent decades, it has grown substantially, due to two main factors: the large size of the domestic market where individuals were gaining increasing purchasing power as the economy developed; and the enormous expansion of international trade especially following the Customs Union Agreement signed with the EU in 1996. These fundamental factors also drive the long-term growth expectations.

In recent years, the automotive sector has become the country’s leading exporter, with total exports of USD 16.9 billion in 2009, which constituted 17.4 percent of Turkey’s total export revenues. Total production increased with a CAGR of 14.3 percent from 2002 to 2009. During 2009, 869,605 units were produced, with over 85 percent of this figure by four main manufacturers alone.

There has been a substantial amount of foreign investment in the sector. Three out of those four main producers, Ford Otosan, Oyak-Renault, and Tofas-Fiat, are partnerships between Turkish and foreign carmakers, while Toyota, the other main producer, is now wholly Japanese-owned.

Automobile ownership per capita has increased considerably in Turkey over recent decades and it is expected to increase further as the current level of 104 cars per 1,000 people is still low compared with countries such as France and Germany, where there are around 500 cars per 1,000 people

The Turkish automotive parts industry showed considerable growth between 2002 and the first half of 2008, in parallel with the increase in vehicle production. However, the supply industry’s performance then declined by 27 percent to USD 13.3 billion in 2009. Exports of components and parts, about 70 percent of which go to Europe, doubled in value between 2005 and 2008, reaching USD 7.3 billion, or 33 percent of the total automotive exports. Also affected by the global financial crisis in 2009, the automotive parts sector is expected to recover along with the automotive sector.