Home » Reports » 20 Years after the Collapse of the USSR: Continuity and Change

20 Years after the Collapse of the USSR: Continuity and Change 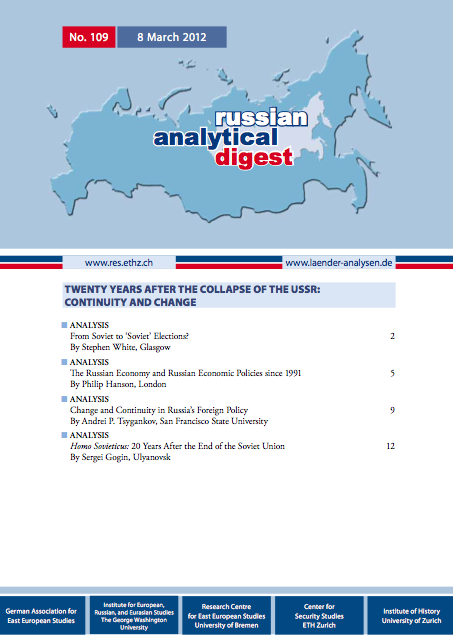 Language: English
Provider: RAD
Pages: 16
With the recent 20th anniversary of the collapse of the Soviet Union, this bumper edition of the Russian Analytical Digest (RAD) retrospectively analyses events, developments and trends in Russian politics, economics, foreign policy and society over the last two decades, and considers their relevance for the future. In the first article, Stephen White examines the experience of elections in the Russian Federation, tracing developments from the last years of the Soviet Union to the recent Duma elections and subsequent popular protests, suggesting that political elites in Russia are now under some pressure to govern in a different way. Philip Hanson analyses the transformation of the Russian Federation from a centrally-planned socialist economy to a market capitalist one, arguing that this process has been restricted by extremely poor initial conditions and by a lack of appetite for radical liberalization. Andrei Tsygankov investigates two decades of foreign policy-making in the Russian Federation, characterizing its development as one of both change and continuity, and identifying three distinct foreign policy trajectories: coalition with the West; defensiveness/balancing; and assertiveness/unilateralism. Finally, Sergei Gogin considers the social/cultural legacy of the Soviet Union on modern day Russia by assessing the continued resonance and altered relevance of the phenomenon of Homo Sovieticus, concluding that if the inter-personal ties destroyed by the Soviet period can be restored within Russian society, then nostalgia for the Soviet era will soon become a thing of the past
Society | Russia | March 09, 2012
Download
Excel Sheet, 16 pages