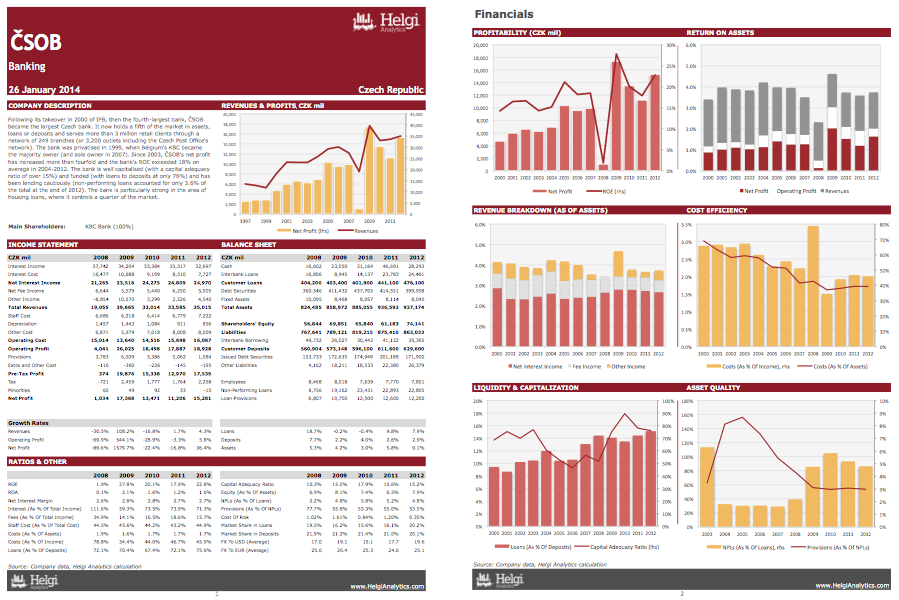 Following its takeover in 2000 of IPB, then the fourth-largest bank, ČSOB became the largest Czech bank. It now holds a fifth of the market in assets, loans or deposits and serves more than 3 million retail clients through a network of 249 branches (or 3,200 outlets including the Czech Post Office's network). The bank was privatised in 1999, when Belgium’s KBC became the majority owner (and sole owner in 2007). Since 2003, ČSOB's net profit has increased more than fourfold and the bank's ROE exceeded 18% on average in 2004-2012. The bank is well capitalised (with a capital adequacy ratio of over 15%) and funded (with loans to deposits at only 76%) and has been lending cautiously (non-performing loans accounted for only 3.6% of the total at the end of 2012). The bank is particularly strong in the area of housing loans, where it controls a quarter of the market.

This report offers a summary of the bank's performance in 1994-2012. You will find here all the key numbers from the bank's balance sheet, income statement and main ratios related to the bank's business.

In addition, the report provides a detailed overview of the bank's market position in the comparison with the overall banking sector and the key statistics of the whole banking system in the Czech Republic.