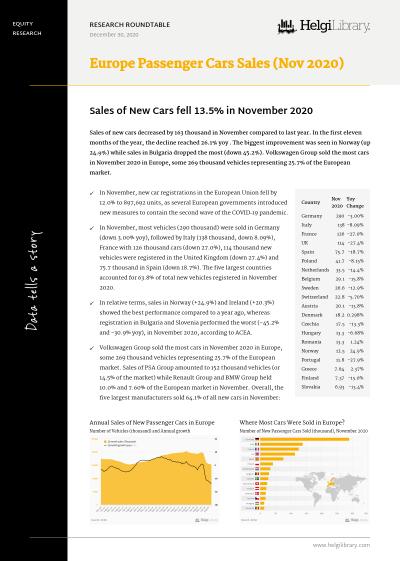 Sales of new cars decreased by 163 thousand in November compared to last year. In the first eleven months of the year, the decline reached 26.1% yoy . The smallest decline was seen in Norway (24.9%) while sales in Bulgaria dropped the most (-45.2%). Volkswagen Group sold the most cars in November 2020 in Europe, some 269 thousand vehicles representing 25.7% of the European market.

In November, new car registrations in the European Union fell by 12.0% to 897,692 units, as several European governments introduced new measures to contain the second wave of the COVID‑19 pandemic. As a result, the EU’s four key passenger car markets all posted declines last month. France and Spain suffered double-digit drops (down 27.0% and 18.7% respectively), followed by Italy with a more modest decline (-8.3%). German losses were limited to just -3.0%.