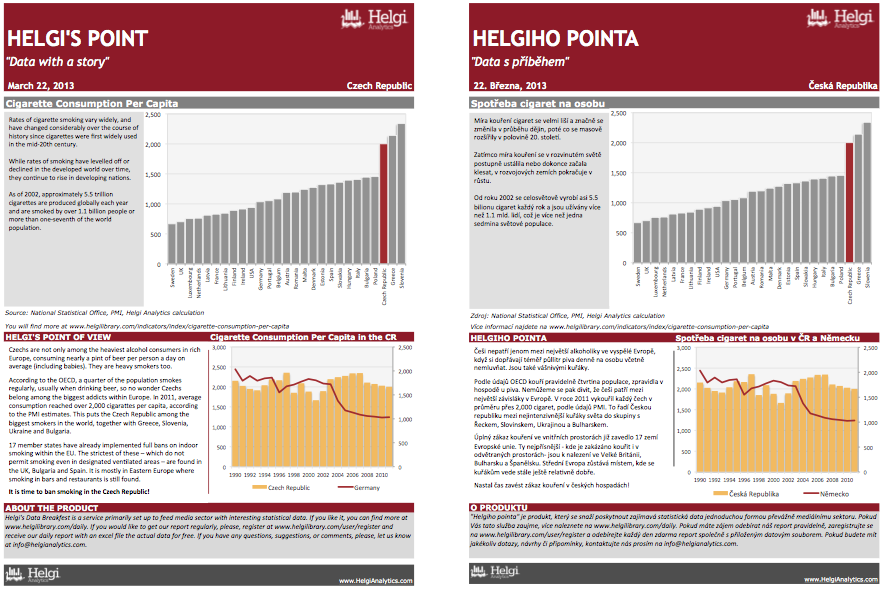 Language: Czech / English
Provider: 2013
Pages: 1
Czechs are not only among the heaviest alcohol consumers in rich Europe, consuming nearly a pint of beer per person a day on average (including babies). They are heavy smokers too. According to the OECD, a quarter of the population smokes regularly, usually when drinking beer, so no wonder Czechs belong among the biggest addicts within Europe. In 2011, average consumption reached over 2,000 cigarattes per capita, according to the PMI estimates. This puts the Czech Republic among the biggest smokers in the world, together with Greece, Slovenia, Ukraine and Bulgaria. 17 member states have already implemented full bans on indoor smoking within the EU. The strictest of these – which do not permit smoking even in designated ventilated areas – are found in the UK, Bulgaria and Spain. It is mostly in Eastern Europe where smoking in bars and restaurants is still found. It is time to ban smoking in the Czech Republic!
Health Care | Czech Republic | March 21, 2013
Download
Excel Sheet, 1 pages