Helgi's Point - Production of Passenger Cars in the Czech Republic 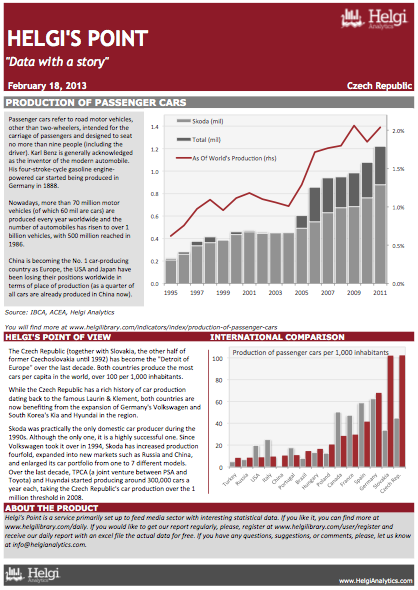 Language: English
Provider: 2013
Pages: 1
The Czech Republic (together with Slovakia, the other half of former Czechoslovakia until 1992) has become the "Detroit of Europe" over the last decade. Both countries produce the most cars per capita in the world, over 100 per 1,000 inhabitants. While the Czech Republic has a rich history of car production dating back to the famous Laurin & Klement, both countries are now benefiting from the expansion of Germany's Volkswagen and South Korea's Kia and Hyundai in the region. Skoda was practically the only domestic car producer during the 1990s. Although the only one, it is a highly successful one. Since Volkswagen took it over in 1994, Skoda has increased production fourfold, expanded into new markets such as Russia and China, and enlarged its car portfolio from one to 7 different models. Over the last decade, TPCA (a joint venture between PSA and Toyota) and Huyndai started producing around 300,000 cars a year each, taking the Czech Republic's car production over the 1 million threshold in 2008.
Automotive | Czech Republic | February 17, 2013
Download
Excel Sheet, 1 pages