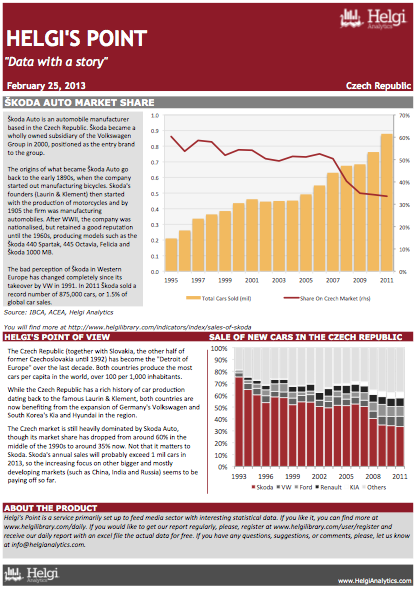 Language: Czech / English
Provider: 2013
Pages: 1
The Czech Republic (together with Slovakia, the other half of former Czechoslovakia until 1992) has become the "Detroit of Europe" over the last decade. Both countries produce the most cars per capita in the world, over 100 per 1,000 inhabitants. While the Czech Republic has a rich history of car production dating back to the famous Laurin & Klement, both countries are now benefiting from the expansion of Germany's Volkswagen and South Korea's Kia and Hyundai in the region. The Czech market is still heavily dominated by Skoda Auto, though its market share has dropped from around 60% in the middle of the 1990s to around 35% now. Not that it matters to Skoda. Skoda's annual sales will probably exceed 1 mil cars in 2013, so the increasing focus on other bigger and mostly developing markets (such as China, India and Russia) seems to be paying off so far.
Automotive | Czech Republic | February 24, 2013
Download
Excel Sheet, 1 pages