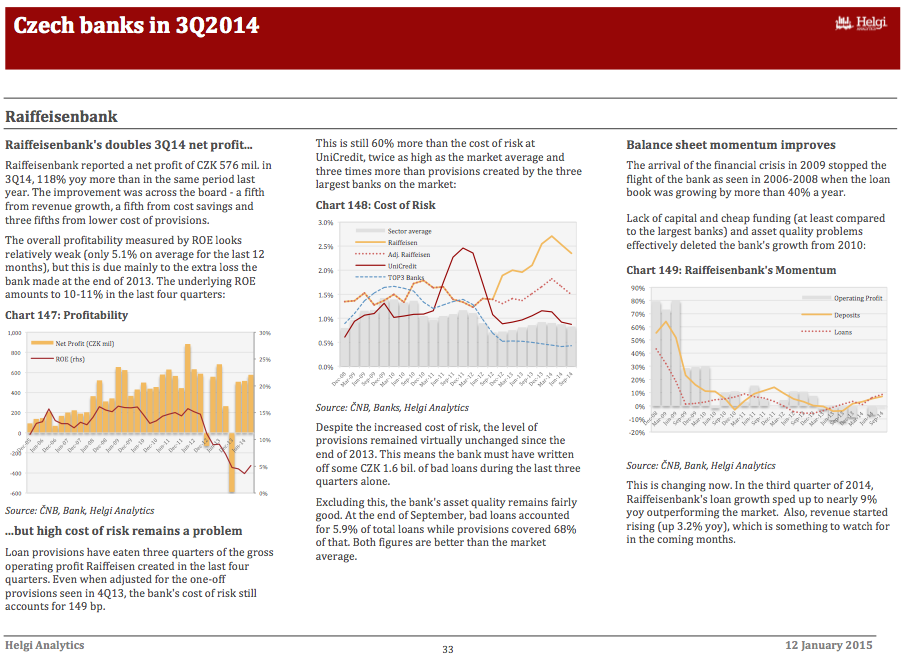 Raiffeisenbank reported a net profit of CZK 576 mil. in 3Q14, 118% yoy more than in the same period last year. The improvement was across the board - a fifth from revenue growth, a fifth from cost savings and three fifths from lower cost of provisions.

The overall profitability measured by ROE looks relatively weak (only 5.1% on average for the last 12 months), but this is due mainly to the extra loss the bank made at the end of 2013. The underlying ROE amounts to 10-11% in the last four quarters:

...but high cost of risk remains a problem

Loan provisions have eaten three quarters of the gross operating profit Raiffeisen created in the last four quarters. Even when adjusted for the one-off provisions seen in 4Q13, the bank's cost of risk still accounts for 149 bp.

This is still 60% more than the cost of risk at UniCredit, twice as high as the market average and three times more than provisions created by the three largest banks on the market:

Despite the increased cost of risk, the level of provisions remained virtually unchanged since the end of 2013. This means the bank must have written off some CZK 1.6 bil. of bad loans during the last three quarters alone.

Excluding this, the bank's asset quality remains fairly good. At the end of September, bad loans accounted for 5.9% of total loans while provisions covered 68% of that. Both figures are better than the market average.

Lack of capital and cheap funding (at least compared to the largest banks) and asset quality problems effectively deleted the bank's growth from 2010:

This is changing now. In the third quarter of 2014, Raiffeisenbank's loan growth sped up to nearly 9% yoy outperforming the market.  Also, revenue started rising (up 3.2% yoy), which is something to watch for in the coming months.