T-Mobile Czech Rep. at a Glance 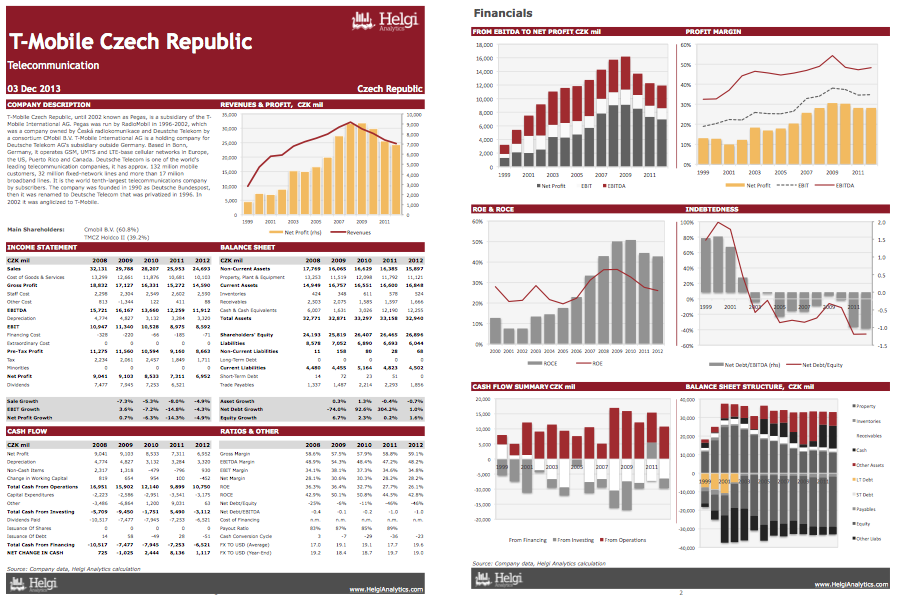 T-Mobile Czech Republic, until 2002 known as Pegas, is a subsidiary of the T-Mobile International AG. Pegas was run by RadioMobil in 1996-2002, which was a company owned by Česká radiokomunikace and Deustche Telekom by a consortium CMobil B.V. T-Mobile International AG is a holding company for Deutsche Telekom AG's subsidiary outside Germany. Based in Bonn, Germany, it operates GSM, UMTS and LTE-base cellular networks in Europe, the US, Puerto Rico and Canada. Deutsche Telecom is one of the world's leading telecommunication companies, it has approx. 132 milion mobile customers, 32 million fixed-network lines and more than 17 milion broadband lines. It is the world tenth-largest telecommunications company by subscribers. The company was founded in 1990 as Deutsche Bundespost, then it was renamed to Deutsche Telecom that was privatized in 1996. In 2002 it was anglicized to T-Mobile.

This report offers a summary of the company's performance in 1999-2012. You will find here all the key numbers from the company's balance sheet, income statement and cash flow on the annual basis