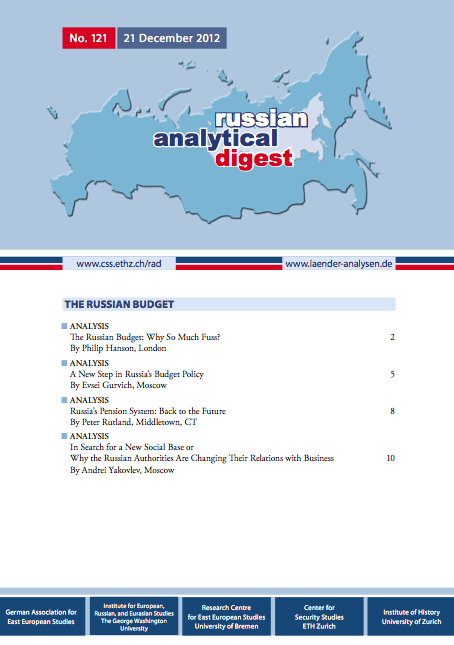 Language: English
Provider: Russian Analytical Digest
Pages: 16
This edition analyses the Russian economy, with a particular focus on the budget. Firstly, Philip Hanson considers the increasingly open disagreements among policy-makers over budgetary planning, suggesting that they reflect profound differences of view within the elite over Russia’s future development. Secondly, Evsei Gurvich examines state revenues and the plans to impose budget discipline from 2013, noting that while the macro parameters of Russia’s fiscal strategy may be on track, currently the expenditure structure is deteriorating with less money spent on infrastructure and human capital and more going to defense and security. Thirdly, Peter Rutland considers the Russian pension system, arguing that the 2002 pension reform is not working with the system requiring ever larger bailouts from the state budget and that the attempts to fix the problem are restricted by a reluctance to adopt unpopular decisions. Fourthly, Andrei Yakovlev assesses the relationships between the political regime and business. He outlines that the future of Russia depends on whether the elites can agree on new rules of the game, but suggests that the lack of correct stimuli for bureaucrats at the middle level continues to be a serious obstacle to development.
Economy | Russia | December 09, 2012
Download
Excel Sheet, 16 pages