UniCredit CR at a Glance 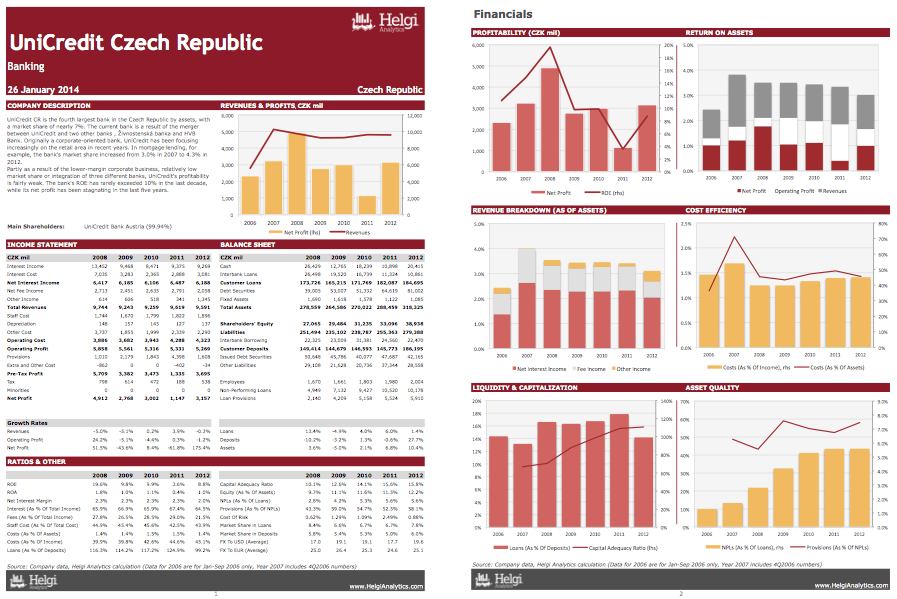 UniCredit CR is the fourth largest bank in the Czech Republic by assets, with a market share of nearly 7%. The current bank is a result of the merger between UniCredit and two other banks , Živnostenská banka and HVB Bank. Originally a corporate-oriented bank, UniCredit has been focusing increasingly on the retail area in recent years. In mortgage lending, for example, the bank's market share increased from 3.0% in 2007 to 4.3% in 2012. Partly as a result of the lower-margin corporate business, relatively low market share or integration of three different banks, UniCredit's profitability is fairly weak. The bank's ROE has rarely exceeded 10% in the last decade, while its net profit has been stagnating in the last five years..

This report offers a summary of the bank's performance 2006-2012. You will find here all the key numbers from the bank's balance sheet, income statement and main ratios related to the bank's business.

In addition, the report provides a detailed overview of the bank's market position in the comparison with the overall banking sector and the key statistics of the whole banking system in the Czech Republic