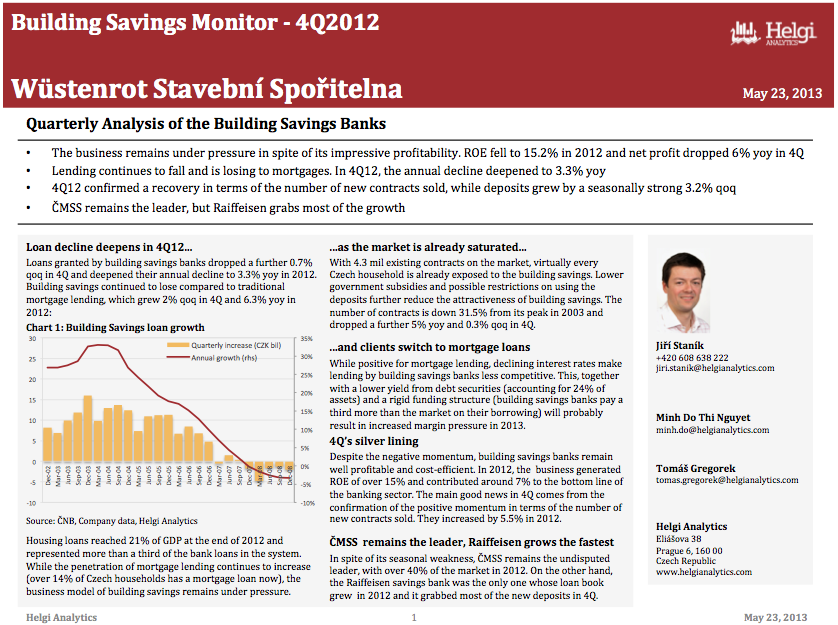 This report focuses specifically on development in Wüstenrot Stavební Spořitelna in 4Q2012. The main conclusions are:

Similarly to Wüstenrot Hypoteční banka in mortgage lending, Wüstenrot Stavební Spořitelna is a relatively little bank, with a 10.5% share of lending and 8.7% of building savings deposits as of the end of 2012.

Although  the bank has been consistently building up its market position (and has gained 1-2% of the market in the last 6 years), it was the biggest loser on the loan market in 2012 (with market share falling by more than 50 bp), while the bank gained over 30 bp in deposits.

In 4Q, the bank lost 29 bp  in terms of its loan market share, but gained 8 bp in  its deposits market shareThe bank’s overall balance sheet momentum is mixed. One one hand, loan growth is being hammered by negative market development and Wüstenrot’s weakening market position (loan book  down 3.4% qoq and 7.9% yoy in 4Q). On the other hand, deposits increased  by a solid 2.5% qoq and 3.9% yoy in 4Q for exactly the opposite reasons.

Partly because of its small size (and limited economies of scale and synergies with a would-be commercial bank on the Czech market) and its conservative approach (the bank has the best loan quality and provision coverage), the bank is traditionally  the least profitable building savings bank on the market. In 2012, the bank achieved ROE of “only” 9.7%, compared to the 15.2% of the 5-building savings banks average.

As shown in the report, the negative momentum in loan growth is taking its toll on the profitability of the sector. As it is the smallest building savings bank on the market (with relatively the highest cost base), no wonder Wüstenrot’s profitability is being doubly hit.

Thanks partly to the above, no wonder the need to create more provisions is low. In 2012, the bank created less than CZK 2 mil of new provisions, or 0.1% of average loans, by far the smallest amount in the sector.

Size matters and the lack of economies of scale is reflected in Wüstenrot’s low cost efficiency. In 2012, the bank’s operating costs accounted for 1.27% of average assets, nearly twice as much as the other savings banks.

Cost savings and loan book development are the two main things to watch for at Wüstenrot in the coming quarters, in our view.

$199.00
Wüstenrot Stavebni Sporitelna at a Glance