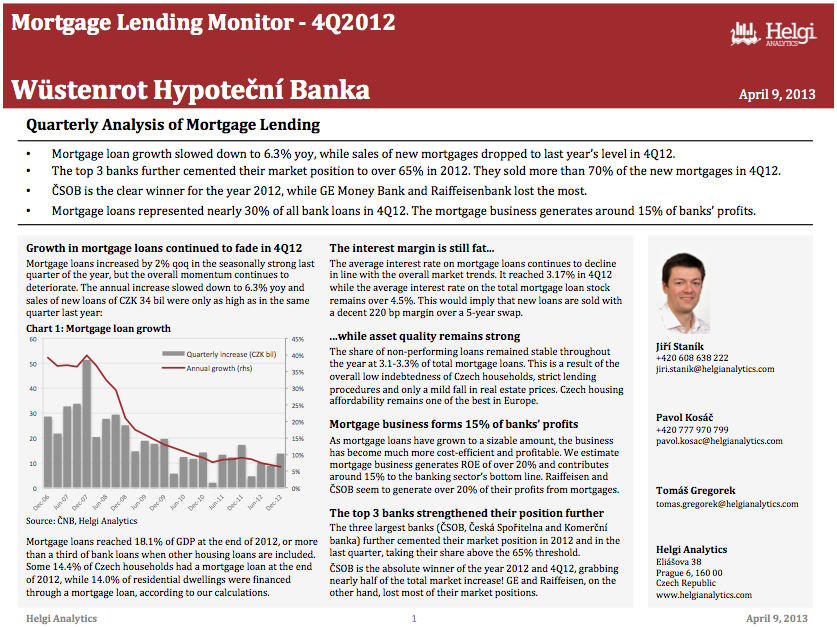 This report focuses specifically on development in Wuestenrot Hypotecni Banka in the 4Q2012. The key highlights are:

Wüstenrot’s mortgage loans increased by an impressive 4.7% qoq and over 10% yoy for the full year. On the other hand, Wüstenrot’s building society lending has dropped nearly 8% yoy, the most among the five building societies:

... but from a very low starting-point

Although Wüstenrot has been growing more than twice as fast as the overall market over the last five years, its late arrival in the mortgage business a decade ago means the bank still occupies only 2.5% of the market. While not bad as such (the bank held only 1.5% of the market in 2009), it remains well below the share the bank holds in the building society business (10.5%) and represents only a tenth of the figure for the other only pure mortgage player on the market – Hypoteční Banka.

The slowdown of the overall market growth (from 20-30% a year to 6% now) also makes it more difficult for Wüstenrot to catch up with the bigger players.

In 4Q, the bank sold 3.4% of the new production and held 4% of the net increase in the mortgage loan stock. This is a respectable achievement, though somewhat lower than in the previous quarters.  In 2011, the bank was selling 5-6% of the new loans, for example:

The relatively small market share and a lack of scale as a result make the biggest (though not the only one, obviously) difference when compared to Hypoteční Banka, in our view.

While interest margin and asset quality numbers seem comparable between the two banks, the cost side makes the biggest difference in our view:

As a result, Wüstenrot achieves ROE in single-digit territory, while Hypoteční banka has been enjoying profitability implying ROE of over 30% (when adjusted for its hefty overcapitalisation)

$199.00
Wüstenrot Stavebni Sporitelna at a Glance