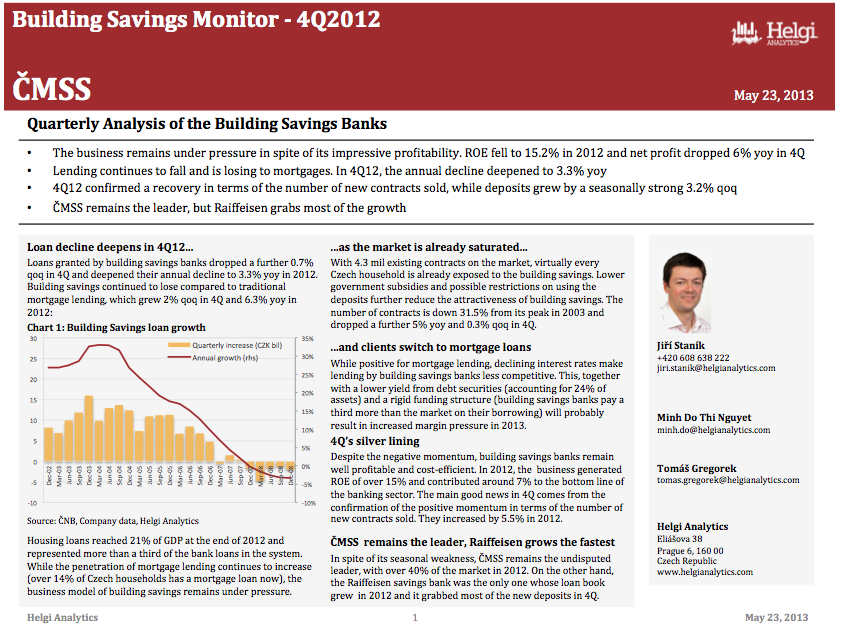 This report focuses specifically on development in CMSS in the 4Q2012. The main conclusions are:

Despite seasonally strong deposit growth in 4Q (up 1.2% qoq), the overall balance sheet momentum remains negative. Loans declined by a further 0.2% qoq and the full-year decline reached 2.6% yoy, while deposits dropped 1.8% in 2012.

Thanks partly to its dominant market position (and subsequent economies of scale), most of ČMSS’s ratios are superior to those of the market. These include ROE, costs to income, asset quality and so on.

When adjusted for surplus of capital, only Modrá Pyramida is more profitable than ČMSS, which is due partly to the low tax burden of Pyramida.

As already described on page 12, ČMSS lacks the economies of scale Hypoteční Banka has achieved in the mortgage lending business. Operating costs accounted for 0.76% of average assets at ČMSS, more than the 0.73% seen on the market:

The comparison shown above suggests that ČMSS might be lacking synergies with its strategic partner ČSOB, something chart 48 implies – Modrá Pyramida has been improving its profitability since being completely taken over by Komerční Banka in 2006.

Apart from a different business model, ČMSS seems to be paying more for its employees than the market. On the basis of quarterly reports, we calculate that ČMSS paid its staff nearly CZK 58,000 gross a month, a quarter more than the competition.

The cost side will therefore be the single main factor to watch for ČMSS in the quarters to come, from our point of view.