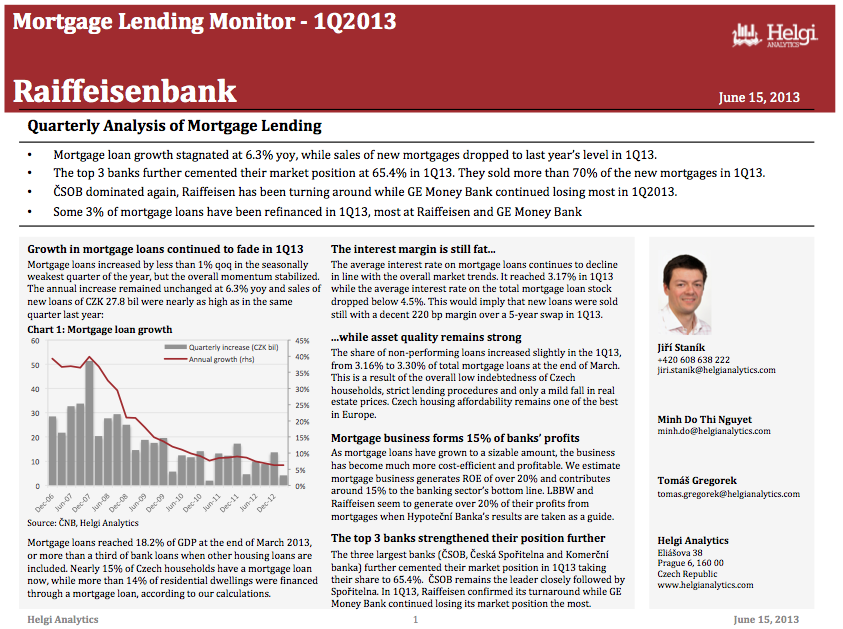 This report focuses specifically on development in Raiffeisenbank CR in the 1Q2013. The key highlights are:

Raiffeisenbank’s mortgage loans increased 0.16% qoq in 1Q13. Despite being still  5.6% down when compared to a year ago, the fall seen in the years 2011-2012 seems to be over now. But, the loans provided by Raiffeisen’s building society continued falling, 1.2% qoq in 1Q13.

Following the aggressive period in 2005-2008 when Raiffeisenbank increased market share in mortgage lending from 2.6% to 9.3%, the bank has been backing off from its conquered positions. At the end of 2012, the bank held 7.26% of the market losing a further 125 bp during the year.

Relatively weak capitalization, funding constraints, already high exposure to the housing market and the expiry of a large part of the portfolio seem to be among the reasons for the retreat.

With a capital adequacy ratio over 12% and loans to deposits at 106% at the end of March, Raiffeisenbank has still a capacity to grow in the coming quarters.

When Hypoteční banka’s financials are taken as a benchmark (for more details see page 9), we believe the mortgage lending business generates around 20% of Raiffeisenbank’s operating and nearly a third of bank’s total net profit now:

This is the highest share on the market (with the exception of the specialized mortgage players such as Hypoteční and Wustenrot. ČSOB follows with a 20% share while mortgage business seems to form 10-15% of total profits at Komerční Banka, Česká Spořitelna or UniCredit according to our calculation.