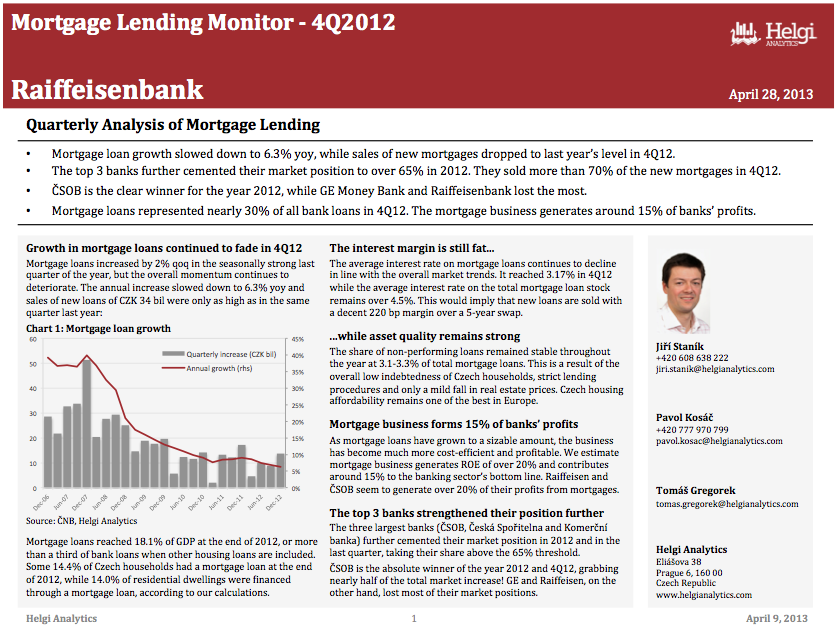 This report focuses specifically on development in Raiffeisenbank Czech Republic in the 4Q2012. The key highlights are:

Raiffeisenbank’s mortgage loans increased 0.3% qoq in 4Q but they are down more than 9% yoy when compared to the 2011 year-end. The loans provided by Raiffeisen’s building society showed some signs of stabilisation, rising 2% yoy.

Following the aggressive period in 2005-2008, when Raiffeisenbank increased its market share in mortgage lending from 2.6% to 9.3%, the bank has been backing off from its conquered positions. At the end of 2012, the bank held 7.26% of the market, losing a further 125 bp during the year.

Relatively weak capitalisation, funding constraints, already high exposure to the housing market and the expiry of a large part of the portfolio seem to be among the reasons for the retreat.

The second half of 2012 suggests, however, that the bank is coming back to the business. From its lows in 1Q, Raiffeisenbank sold 7.5% of the total number of new loans in 3Q and over 9% in 4Q, regaining some of its old positions.

With a capital adequacy ratio over 13% and loans to deposits at 101% at the end of September, Raiffeisenbank is well positioned to continue in its aggressive approach in the coming quarters.

When Hypoteční banka’s financials are taken as a benchmark (for more details see page 9), we believe the mortgage lending business generates around 20-25% of Raiffeisenbank’s overall profitability now.

This is the highest share on the market (with the exception of the specialised mortgage players such as Hypoteční and Wustenrot. ČSOB follows with a 20% share, while mortgage business seems to form 10-15% of the total profits at Komerční Banka, Česká Spořitelna or UniCredit according to our calculations.